For those of you who live in the desert cities of Southern California, including the Mojave Desert, I am pleased to announce that rattlesnake season has officially opened! Well, "pleased" might be an overstatement.

I live in a part of Palm Springs that fronts the San Jacinto Wilderness and San Gabriel mountains. Every year about this time I find those little slithery critters in my garage, on my porch, or am called to my neighbor's homes to help capture and relocate these little rep's, whom I hesitate to call invaders (I imagine that there is much discussion in rattlesnake warrens about the human invaders). They seem most active after five (cocktail hour?) or in the early mornings - hiker's and dogs beware (seriously, keep your dogs leashed - I know, I have a Jack Russell Terrorist)!

Why do my neighbors call me? They believe I won't get bitten (professional courtesy possibly?)

Truth be told, rattlesnakes are extremely passive creatures unless we are talking about the green mojave version, which is a rattlesnake on steroids. Fortunately the greens are not generally found in my locale. I've encountered them in Arizona (near Sedona) and was impressed by their aggressive behaviors. The local varieties just want to get along with us, but their timidity also makes them dangerous - it is easy not to spot one until you are upon it. Even then they will not go out of their way to strike. Many times I've been forced to wrangle one into a trash can or ice chest that is then carried a few hundred yards from the house and released, and rarely do they attempt to bite the pole that guides them into such receptacles.

I shouldn't need to state that killing them is not an option, and is an ignorant thing to do. However, much like the attack behaviors that people often reflexively engage in at the commencement of their divorce or partnership break-up, the limbic part of the brain does tend to go into reactive over-drive when surprised by one of these creatures.

If you cross paths with one, some recommendations are as follows:

Now, rattlesnakes are really common in areas that are rocky or abut the desert. Around Palm Springs these areas include Chino Hills, the Mesa, Araby, and south Palm Springs around the Canyon Country Club. Expect to encounter one at almost anytime now in the Indian Canyons. You are not nearly as likely to see one in a highly residential area. But if you live on the edge of the desert, sooner or later you will meet one close up.

Here is yesterday's round-up (found inside my neighbor's house):

Okay, this little guy looks just like the granite rocks and yellow weeds
that dot the local landscape -
here's a closer look: 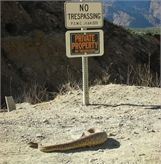 ~ Be careful out there and protect your pets! (And bathe them too!) ~