The Uncertain Landscape of Date of Separation in California Divorce -

My colleague, attorney David C. Stone of Anaheim, recently brought to my attention Senate Bill 1255 (introduced by Senator John Moorlach on February 18, 2016), which if adopted will add Family Code section 70 to the California Famly Law Act and amend sections 771, 910, 914, and 4338 to make them consistent with the new statutory language of section 70 'defining' (or not) "date of separation" consistent with one line of existing appellate authority on the subject. Last July, the California Supremes shocked the family law community by creating a bright-line rule that essentially held that the language which has existed for well over 100 years in the form Family Code section 771(a), to wit "The earnings and accumulations of a spouse, ..., while living separate and apart from the other ..., are the separate property of the spouse" [italics added] means and has always meant that physical separation cannot occur until spouses are living at two different addresses. This was the Marriage of Davis (2015) 61 Cal.4th 835 decision.

This literalistic approach to interpreting section 771 stunned many matrimonial lawyers, and their hue and cry could be heard far and wide - including from me. [Magnitude 8.1 Earthquake Rocks California Laws Governing Date of Separation]. The date of separation is integral to defining the length of marriage for purposes of alimony, and to the characterization of what is joint and what is separate property. Essentially, Davis operates to force one spouse or the other to relocate from the family residence before they can be relieved of the economic consequences of marriage or conversely to obtain their just (and necessary) entitlements, or even to be able to apply to the courts for interim orders for support or child custody and visitation. Hence, moving out becomes a prerequisite for a wife and/or mother who wishes to divorce, where the other spouse refuses to go - and while living together the parties are deemed to be continuing in the marital relationship, with all the increased rights and obligations that are a consequence of that relationship. Not only did this up-end the advice and expectations that we family law attorneys have been giving our clients for years based upon prior caselaw (which was in conflict), Davis cast a blind eye to the emotional and economic realities of families caught in the dissolution transition.

In fairness to Chief Justice Cantil-Sakauye, who authored Davis, the Supreme Court's decision greatly simplified a complex issue that has huge ramifications for lawyers and self-represented parties negotiating the resolution of their cases by substituting a simple bottom line for all the uncertainties and power imbalances that arise in divorce when litigants cannot be sure of outcomes - i.e., what a trial court might ultimately find the date of separation (DOS) to be. And, it ended a certain revenue stream to lawyers who are often forced to set bifurcated trials in order to obtain that determination. California family law is - after all - overly complex, and obscenely expensive. While the lawyer and divorce consumer community might have adjusted to the scriptures of Davis over time, in ways that might ultimately prove beneficial, it appears that they will never get the chance.

Family Code section 70, if adopted, will provide as follows:

(a) “Date of separation” means the date that a complete and final break in the marital relationship has occurred, as evidenced by both of the following:

(1) The spouse has expressed his or her intent to end the marriage to the other spouse.

(2) The conduct of the spouse is consistent with his or her intent to end the marriage.

(b) In determining the date of separation, the court shall take into consideration all relevant evidence.

As you can see, this makes everything about the parties' supposed intent and their conduct up for grabs, and indeed "the court shall take into consideration all relevant evidence." Although California is supposedly a "no-fault" jurisdiction, I guarantee you that this amendment will create a fault free-for-all because all behaviors and activities by spouses will be fair game in establishing their intentions about continuing or ending the marriage. Clearly, sexual activity outside the home is implicated. Butt-hurt spouses will have a blank check to parade all their suspicions and blames, in what might devolve into a three ring service where angry clowns manage the show.

As I predicted in my July 21 Blog about Davis, "A sea-change, perhaps, or meet the new boss, same as the old?" Family Code section 70 restores the old boss to the DOS wars, but this time on steroids. For my money, it is a reactive step backwards and little committed attention seems to have been given to creating a new solution to the problems I agree were created by Davis.

Why not consider a mixed rule that qualified the requirement that parties live at two separate addresses with a presumption of no DOS if they are living under the same roof, which could be rebutted and overcome by evidence showing some form of practical necessity that made moving out overly burdensome to a spouse and/or their children? This would create a threshold burden of proof, that would winnow the field of competing claims. Perhaps it might even require more certain "clear and convincing" evidence to meet. This would give room for the realities of the land of relationship-endia, without opening the floodgates to unbridled divisiveness.

If California Senate Bill 1255 becomes effective (it evidently will), which would be on January 1, 2017 but it is only retroactive to cases that are already pending then, an opportunity to streamline and make rational California family law may be lost. But, ahem, a major source of litigation revenue will be restored - which is nice for the lawyers, including this one! My Jack Russell Jazzie does need to go to college. Or Military Dog Training school - or ... help me, ... somewhere to get educated, where she also gets walks!

In fact, I am soliciting bifurcated DOS trials, because my child is a royal and costly pain in the ass (but she says that about me too) ~

Be safe out there, and humored!

(P.S. - file your Requests to Set your matter for trial at once if Davis favors your facts, if you can get your [bifurcated] case heard before the end of 2016!) 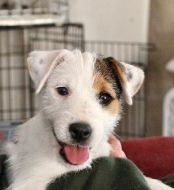